To help explain the crazy, random email sent out to everyone by Aaron's brother, Mike; yes, Aaron and his other brother, Ryan, we're stopped by police. They were apparently stealing their mother's stove right out of her home. Or at least that's what her neighbors thought. They were in fact taking out her old stove to install a new one that all of her kids bought her for her birthday, as a surprise. As they were coming out of the house just about to finish the job, the cops pull up and start yelling at them to "Stop! Step back! Don't move!" They try to explain the situation and thought the easiest way to convince them was to invite them in. They simply said, "It's a really nice stove, come inside we'll show you." They showed him the birthday card, set nicely on top of the stove, and then proceeded to show them pictures around the house of themselves, to prove that it really is their mother's house. It was a funny situation. But no worries nobody was arrested. 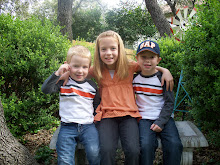